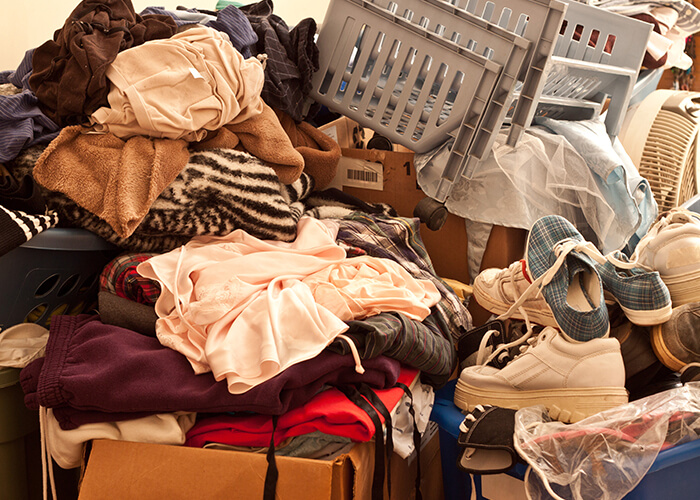 Hoarding disorder can affect men and women of any age or financial status.  In fact, it is currently unclear among the experts what specifically may trigger hoarding disorder.  However, doctors and psychologists have created a list of risk factors that may contribute to the full onset of hoarding disorder.  These include:

Unfortunately, these risk factors are so common that it is nearly impossible to diagnose those at risk until after symptoms have begun to manifest.

Hoarding disorder manifests in many different ways and can include a wide variety of items including trash, junk, food, animals, and virtually anything else.  Some sufferers may only collect single items, such as paperclips, while other may collect anything they can get their hands on.
Symptoms of severe hoarding disorder may include:

This is not a complete list of possible symptoms by far because hoarding disorder can be as unique as the individual suffering from it and many symptoms can vary between people.

Hoarding disorder is a condition that carries powerful emotional and psychological repercussions, and as such it is best to speak with a mental health professional to develop a treatment program.  Lifestyle changes, support groups, and therapy have all been shown to be successful forms of treatment, and many hoarders have found success with certain antidepressant medications, such as Paxil.

One of the most important points of hoarding disorder treatment is removing the clutter and returning the hoarder’s home to a livable and sanitary condition.  This can be difficult however, as many hoarders tend to collect items that have become hazardous with age, such as food stuffs.  Other health concerns like sharp objects, vermin infestation, or biological waste may also be present.

For these reasons it may be best to contact a professional sanitation service to assist with the cleaning effort.  In Phoenix, Scottsdale, Tucson, or any part of Arizona, the most trusted hazardous material removal service is BioteamAZ.  BioteamAZ’s long history of experience with hazardous waste ensures the highest level of sanitation and customer satisfaction.  Contact us today!