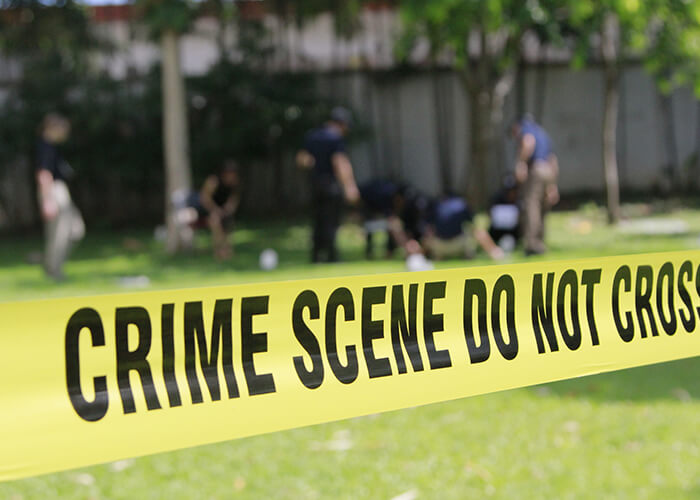 It is a sad reality that sometimes people make horrible choices and take the life of another person. When that happens, our staff at BioteamAZ are always there to clean up the aftermath so no one else has to suffer harmful effects of the biohazards at the crime scene.

In one recent incident last week, a man was shot and killed in Chandler, Arizona. After the police received a call from someone reporting their friend had been shot, the first responders found a 25 year old man with multiple gunshot wounds to his torso lying in the parking lot outside of an apartment complex near Arizona Avenue and Queen Creek Road. The young man was immediately taken to a hospital where he later died.

When investigating the scene of the crime, the police found an envelope that had fallen out of the vehicle in question. Upon further investigation, they found it belonged to the suspect’s girlfriend who is known to drive a vehicle matching the one involved in the homicide. This led them to arrest a 19 year old man who told police that he, his 13 year old brother, and two other suspects drove to the apartment complex that night with the intent to rob a young woman after completing a drug deal for marijuana wax and cartridges that had been arranged previously. When they arrived, however, instead of a young woman, they were met by the 25-year-old man instead.

The suspect was arrested and now faces a charge of first-degree murder. It is not known if others have been arrested as well.

After an event such as this, emergency crime scene cleanup in Chandler is essential for the safety of anyone in the area. Between the blood, drug paraphernalia, and gun powder residue, the crime scene is a dangerous place to be for those untrained in personal protection and blood cleanup. Not only does the visible blood need to be cleaned and the area decontaminated, but all the places the blood could have gone unseen must be cleaned as well. If thorough biohazard cleaning does not occur and the infected materials legally disposed of as medical waste, a person can unknowingly become infected with bloodborne pathogens such as HIV, Hepatitis B and C, among others. If the crime is committed indoors, professional crime scene cleanup becomes especially important. If all biohazards and investigative chemicals are not found and fully removed, then fluids and body matter can soak through building layers and damage the structure while giving off a horrible odor.

A crime scene cleaning company trained in proper biohazard cleanup knows how to completely eradicate biohazards from any environment quickly and with professionalism. With experience and industrial-grade cleaners, they can quickly clean out all the biohazards, legally dispose of all infected materials while strictly adhering to all local rules and regulations, and make sure the property is thoroughly clean, odor-free, and safe.

BioteamAZ is here for property owners for crime scene cleanup

If you are a homeowner or have rental property in the Chandler area or surrounding communities, BioteamAZ is always here for you any time you need us. A tragedy such as this is terrible enough for those whose lives are forever altered. It does not need to continue wreaking havoc in the lives of others. Protect yourself from all legal liability due to improper cleanup by having the blood and other bodily fluids cleaned professionally from the crime scene by professional crime scene cleaners who know how to restore the area to what it looked like before the event occurred.

Our thoughts are with those who lost their loved one in this tragedy.